All of my poetry has been about winter these days and honestly, I’m sick of it. So I’ve been scouring my files and found this haiku that made me laugh. Perhaps it will make you think of another season. Perhaps it will make you laugh too. The illustration is my own from the book FUFU AND FRESH STRAWBERRIES written by Caitlin Lowell and Charlotte McDonald, Telling Room, Portland, ME.

The snow
climbs trees
leans on doors
peeks in windows

The snow
sifts through rafters
drifts in dunes
carves valleys

The snow
huddles in teams
blitzes 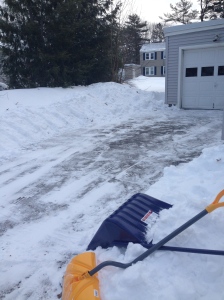 These were taken after Blizzard Juno. We now have an extra 15 or 20 inches in southern Maine.

I use TweetDeck to watch hashtags and I can tell you that the #alayma was cruising! Those tweets were coming so quickly I couldn’t even read them. Good thing I had the live webcast going so I could hear all the cheers and gasps from the audience. It would seem librarians wear their hearts (fave books) on their sleeve. This was way better than the Super Bowl and any of those actor award shows. I also had my Goodreads window running and my To Be Read shelf is overflowing (just when I thought I was getting caught up). What a fabulous morning for readers, children’s books, librarians, teachers, writers, illustrators. I’m overwhelmed by awards. Perhaps the phrase “Sticker shock” should be re-coined?!

The biggest take-away was that #weneeddiversebooks scored a huge win today. It was amazing to see so many diverse books and their creators recognized. The awards to individuals for their contributions to the field went to diverse book creators. The following is quoted from the Children’s Book Council website (which has all of today’s categories and winners):

Laura Ingalls Wilder Award honors an author or illustrator whose books, published in the United States, have made, over a period of years, a substantial and lasting contribution to literature for children.

Margaret A. Edwards Award for lifetime achievement in writing for young adults:

2016 May Hill Arbuthnot Honor Lecture Award recognizing an author, critic, librarian, historian or teacher of children’s literature, who then presents a lecture at a winning host site.

The 2016 Arbuthnot Lecture will be delivered by Pat Mora. Pioneering author and literacy advocate Pat Mora has written more than three dozen books for young people that represent the Mexican American experience.

The Newbery was a complete sweep of diverse books. EL DEAFO, by Cece Bell, and BROWN GIRL DREAMING by Jacqueline Woodson received Newbery Honors and the Newbery went to THE CROSSOVER by Kwame Alexander.

It wasn’t the only award for BROWN GIRL DREAMING which also took the Sibert Honor and the Coretta Scott King Honor. These in addition to the already prestigious National Book Award in Young People’s Literature. Good thing the cover was designed with plenty of negative space.

Jacqueline Woodson is past VCFA faculty and VCFA was also well represented by current faculty member Kekla Magoon’s HOW IT ALL WENT DOWN, the audio version of alumna Julie Berry’s THE SCANDALOUS SISTERHOOD OF PICKWILLOW PLACE won an Odyssey Honor, and alumna Jandy Nelson took home the Printz and the Stonewall Honor with her amazing I’LL GIVE YOU THE SUN.

Oh @jandynelson! How extra gorgeous does your book look with these stickers on it?!?!?! #alamw15pic.twitter.com/jSL9woaCNt

Despite the sticker shock… it’s time to get back to work, to my own works in progress, to my own dreams and words. Congrats to all the winners!